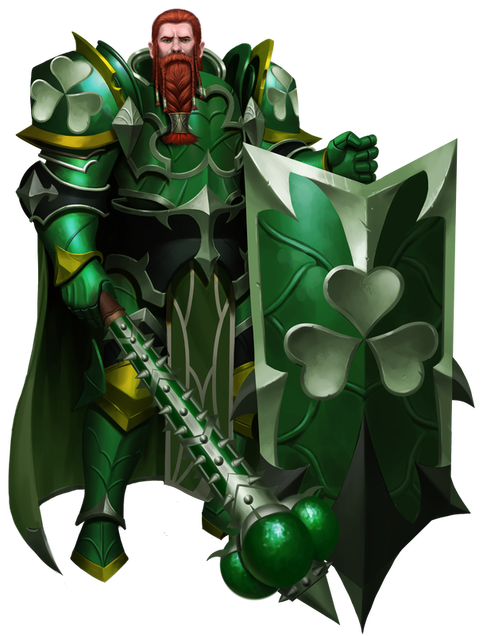 ​​Varrius Goerwhey: The King of Clubs:
King Varrius Goerwhey rose to status by force. As a boy, working the family fields, his drive to succeed through hard work was beat into him. His poor family grew what they ate and, Varrius, the middle of seven children quick outgrew his siblings.  At thirteen, he slew his eldest brother and challenged his father for the farm. His father chose to accept the challenge and to the family's dismay, Varrius killed his father and took over as the family patriarch at the age of fourteen. After that, he bullied or buried any opposition he met in his ascension to the Throne in the West. By fifteen he had maneuvered and pummeled his way into a more prestigious line of work in the mines, but he knew it was a means to an end. At sixteen he was pulled into the Endless War where he nurtured his ill temper and trained his body beyond mere strength; he became a veritable wall on the battlefield. When he turned twenty, he joined a rebellion that led to the death of his predecessor king, then turned on his companions and took the crown through force. He decimated the disorganized ranks of the other conspirators with brute force. Unhappy with what remained of the previous king’s castle, King Goerwhey slaughtered a noble family housed in a keep in the Western Ridges. He then personally led the reconstruction of his castle-fortress over the keep. It was immediately apparent that he cared more for the land under his feet than his subjects. He worked his subjects tirelessly in the fields and mines to fuel his stolen army and fortify the weak walls around his fiefdom. He would often dress in a traveling cloak and wander his lands to observe his people at work. If there were any sign of laziness, lackluster work progress or disorganization he would crack them over the head with a thick shillelagh. The weapon’s reputation became feared throughout the western region of Tistrofel with its three bulbous knobs on the head. Some of his subjects began calling him the “King of Clubs” in quiet circles, and eventually, the word reached King Goerwhey’s ears. Few have ever seen him smile, but rumors abound that he was so thrilled with the derisive title that he fashioned his banner and designed his armor to reflect the name his people had provided. He even went so far as to make a holiday dubbed the “Day of Clubs” where his subjects would armor up and engage in combat, armed only with a club, for his entertainment.  King Varrius Goerwhey is a walking fortress on the battlefield. Since the mysterious Kao arrived and established the Tournament of Kings, Goerwhey has proven to be competent and heavy-handed combatant. He is extremely adept at absorbing raw attacks and blocking with his heavy kite shield dubbed "Lucky". He has a penchant for smashing his opponents with "Iron Thorn", the massive club that was specifically designed to remind his people of his power, while simultaneously stunning his opponents.

What to Expect: This is s a game of luck, strategy and diplomacy. Drawing cards and rolling dice bring about a random and chaotic experience, while each king's traits, abilities and powers inspire strategic planning. Table talk, coercion, threats and pleading are all legal ways to convince your enemies to attack other players, while at the same time, only 1 king will remain standing in the end.
How to play: Attack with a playing card (sword) specialty cards (Jack, Queen, King, Ace and Joker) all allow you to perform special feats. 2-10 cause direct damage equal to the card value. Your shield is a domino which is used to reduce the damage by an amount equal to the domino value. Dice (health points or HP for short) keep track of how much damage you can absorb before you are slain. Whatever is left of the card after the shield is destroyed will carry forward and reduce your HP.
For example: Player 1 draws a card and gets a 10. Player 2 has an the 3/5 domino (8-point shield). The domino will reduce Player 1's 10 damage by 8. The remaining 2 points reduce the dice (HP). That’s the BASIC idea. Each king is unique in how they can manipulate the rules and use special abilities to enhance their play. Additionally, double dominoes (shield empowerments) have special effects that can alter the course of play.

Battle Kings print and play version is now available in the AJO Presents online store. 100 of all proceeds will be donated to the Florida Dream Center to help them continue to combat hunger, human traficking and homelessness during the COVID-19 pandemic. The print and play version includes the four suited kings with traits and abilities, and offers an opportunity for you to enjoy building or printing the game pieces with your family. If you plan to purchase the print and play version of Battle Kings, you should have a deck of playing cards and at least 2 standard, six-sided dice, though 5 of each color (red-hearts, blue-diamonds, green-clubs and black-spades) would be ideal. A working knowledge of addition and subtraction helps keep the games a bit faster paced.

In order to purchase Battle Kings head over to the store.
© 2020, AJO Presents. All rights reserved.