Fuming with rage and bitterness six friends band together to avenge the destruction of a small human settlement. Through sheer determination and stoic resolve they succeed, though at what cost? Because of their actions, one of them will fall to the enemy and Velthanjantle, the demonic avatar of Kargonis is resurrected. Though weak, the demon breaks free to reign havoc once again upon the world. Fifteen years later, the demon is fully healed and searching for the mysterious Three Chains of Gold; three relics from the War of the Gods which when united will bring about new balance among the Greater Realms. If Velthanjantle is able to find the chains the dark god could be free once more to walk among mortals and foil the decree set in place at the culmination of the War of the Gods by Ravina Estarra, the Goddess of Time. It falls on those who released the demon to gather their forces and train their armies and guilds to stop the end of the world. Together or separated, six mortals must set in motion the events necessary to save Reality from ultimate doom. From demonic plots and greedy dragons to hardened assassins and pious priests, the demon Velthanjantle quickly becomes the least of their problems. 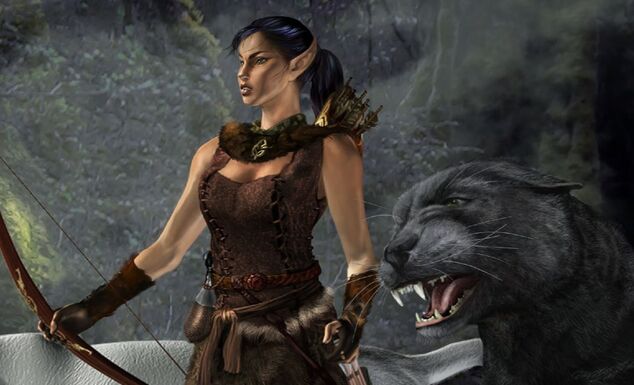 Zariah Everleaf, Soda & Ados:
Zariah is a Wood Elf archer who befriended her companions Soda, a black dire panther, and Ados, an albino panther when she was young.  Raised in the war-torn First Forest, she developed a hatred for the Val'Arias Fialt (winged cat-people) and their human allies.  Her parents sacrificed themselves to allow her a chance to escape.  Along with her incredibly loyal and intelligent companions she fled to anywhere, and landed on the continent of Talonus. She met Eldorion Silverleaf in the cliffside city, Kazaroth, shortly after her hasty exodus where in him, she found a friend, a partner, and eventually a lover in the budding assassin's guild, the Thorns of Chaos.  Together, they hand-pick members with specialized talents and weapons for what Eldorion claims is an apocalyptic event that is yet to come.  However, they can't call themselves assassins unless there is work to be done.
© 2020, AJO Presents. All rights reserved.